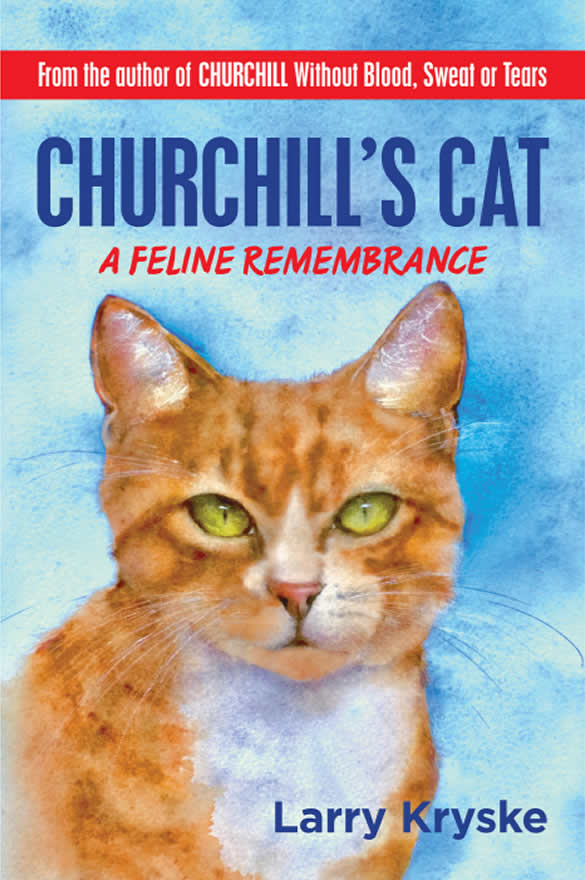 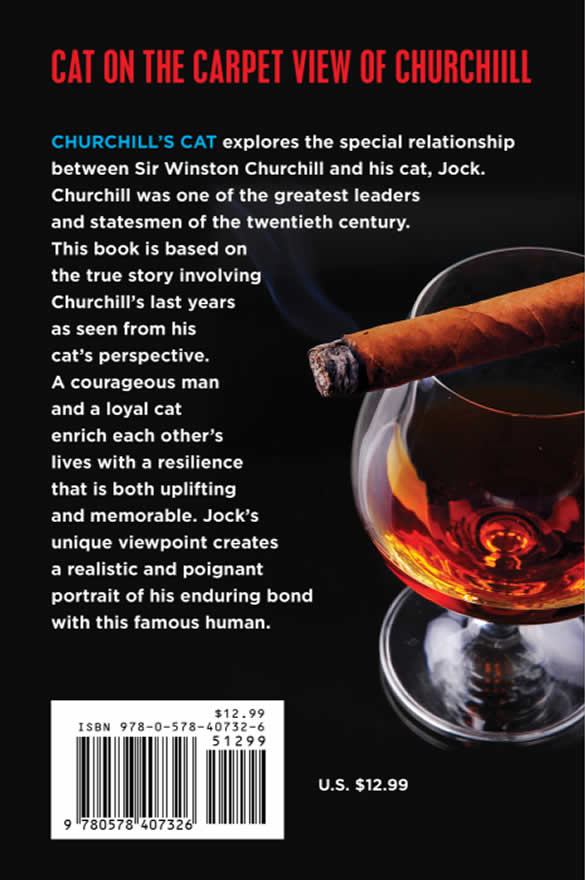 The purpose of Churchill’s Cat: A Feline Remembrance is threefold. First, it illuminates the true story of Winston Churchill’s last years. Second, it reveals the origin of the charming Chartwell tradition of always having in residence a marmalade cat with white bib and socks. Finally, it reminds people of Churchill’s legacy as one of the preeminent leaders and stateman.

Jock was Sir Winston Leonard Spencer Churchill’s last cat. He was rescued from the RSCPA by John Rupert (Jock) Colville, Churchill’s private secretary during his two premierships and later a close family friend. Colville, who was knighted in 1974, gave the kitten to Churchill for his eighty-eighth birthday on 30 November 1962. 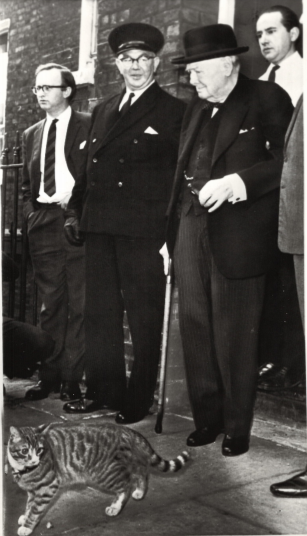 Jock the cat survived being hit by a car on the road that fronted Chartwell as well as a bout with
pneumonia. He enjoyed meals with Sir Winston and slept first in the hall outside his bedroom and afterward on his bed. He sat on Churchill’s lap during the group photo of his grandson’s wedding reception and was seen at Churchill’s feet while he waved to the crowd from the front of his London home. Near the end of his life, Churchill kept a photo of Jock by his bed. 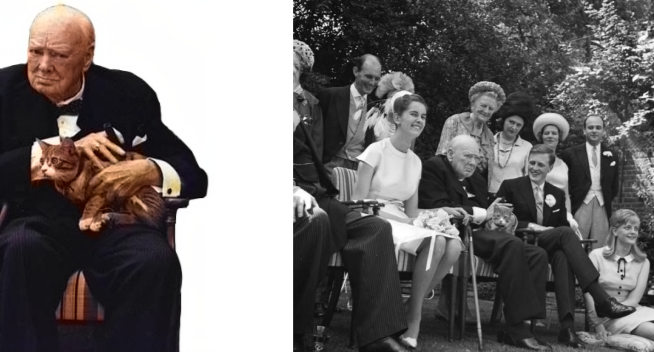 During Churchill’s final days, Jock was ever faithful to his human, remaining on his bed until he passed away on 24 January 1965, exactly seventy years to the day after his father’s death. According to Sir Anthony Arthur Duncan Montague Browne, Churchill’s last private secretary, Jock inspected Churchill’s still body in his open coffin.

After her husband’s death, Clementine Churchill sold #27 and #28 Hyde Park Gate and took a smaller residence nearby. Chartwell reverted on Churchill’s death to the National Trust, where it was restored to the floor plan it had when the Churchills lived there in the 1930s. Grace Hamblin, Clementine’s private secretary, became the first administrator of Chartwell. In 1966 it was opened to the public. 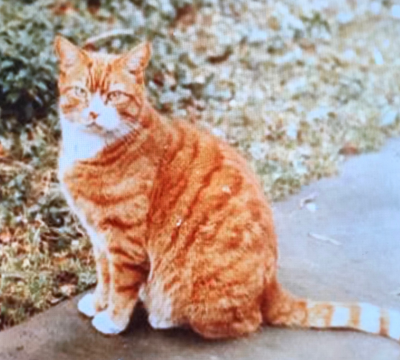 Jock moved back to Chartwell after Churchill’s death and lived his remaining days there, relishing the gardens, fields, woods, and ponds. He grieved for the loss of his friend during that first year without Winston, but eventually the country estate worked its magic on him and ministered to his sorrow. He and Grace enjoyed many fine moments together in the ensuing nine years.

Jock passed away late in 1974 at the age of twelve and was buried in the Chartwell pet graveyard next to Churchill’s poodles, Rufus and Rufus II. A stone marks his grave with his name, Jock, and the dates 1962-74 etched in the stone. 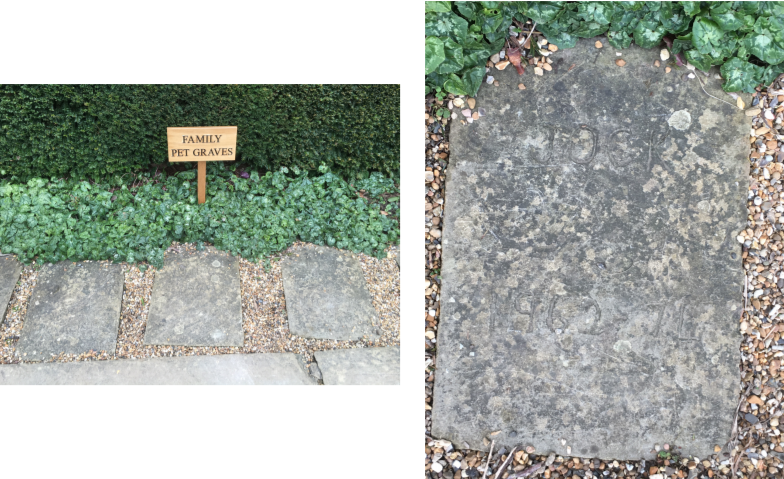 Clementine’s promise to her husband that there should always be a Jock at Chartwell has been honored. As of this writing, Jock VI is the current resident cat. Visitors often see the marmalade cat with the white bib and socks patrolling his domain in much the same way as the original Jock.

“Churchill’s Cat is an enchanting and charming book. All cat lovers and fans of Winston Churchill will love it – and understand it. I loved it.”
Cita Stelzer, Author of Working with Winston and Dinner with Churchill

“Churchill’s Cat certainly gives readers a unique angle, and I was surprised at how quickly and thoroughly it drew me into Churchill’s world.”
Dr. Allen Packwood, Director, Churchill Archives Centre, Cambridge

“A most enjoyable book that gives an intriguing look at life at Churchill’s Chartwell.”
David Riddle, Former National Trust Volunteer at Chartwell

“What a loving portrayal of both the man and his cat! The emotional bonds in this book grow, not only between Winston and his cat, but also between the reader and the two main characters.”
Cheryl Servais, Cat lover and world traveler

“The cat’s point of view shows us a side of Churchill not often seen. A delightful and moving work of historical fiction.”
Heather Gregory, Detective Inspector (Ret.), London Metropolitan Police Service 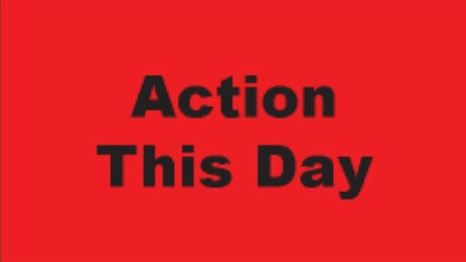 Have Larry speak at your next event.